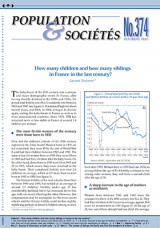 How many children and how many siblings in France in the last century ?

The baby-boom of the 20th century was a unique and major demographic event. In France, after having steadily declined in the 1920s and 1930s, the period total fertility rate suddenly rose between 1945 and 1947. It remained high for about twenty years, and then, in  1964, it began to decline again, ending the baby-boom in France, as well as in most industrilized countries. Since 1975, TFR has remained more or less stable in France at around 1,8 children per woman.

The French population projected to level off at 70 million