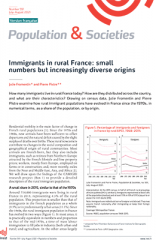 How many immigrants live in rural France today? How are they distributed across the country, and what are their characteristics? Drawing on census data, Julie Fromentin and Pierre Pistre examine how rural immigrant populations have evolved in France since the 1970s, in numerical terms, as a share of the population, or by origin.

In metropolitan France, immigrants or foreigners have represented a constant, albeit small (4.3% and 2.5%, respectively) share of the rural population since the 1970s. While most live close to international borders, in western France, or close to large or medium-sized cities, their spatial distribution is increasingly uniform across all regions of France. Most immigrants are from Southern, Western, and Northern Europe and from North Africa; these two groups differ notably in household size, with Europeans tending to live in smaller households. But inflows from other countries have increased, leading to a slow rise in the numbers of rural immigrants and foreigners and a diversification of origins since the 1990s at least.

How the COVID-19 epidemic changed working conditions in France