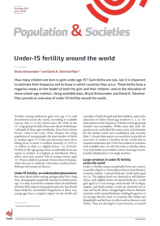 Approximately 400,000 births to adolescent girls under age 15 occurred worldwide each year in the 2010s, representing a fertility rate of around 13 annual births per 10,000 girls aged 10–14. More than half of these occurred in sub-Saharan Africa, where we observe 40 annual births per 10,000 girls aged 10–14. Since the early 1970s, fertility among girls aged 10–14 has decreased sixfold worldwide. In countries of the Global South, a majority of these births occur within a union (marriage or non-marital cohabitation).

How many children are born to girls under age 15? Such births are rare, but it is important to estimate their frequency and to know in which countries they occur. These births have a negative impact on the health of both the girls and their children, and on the education of these school-age mothers. Using available data, Bruno Schoumaker and David A. Sánchez-Páez provide an overview of under-15 fertility around the world.

Fertility among adolescent girls over age 15 is well documented across the world. According to available sources (Box 1), it has halved since the 1970s in the 15–19 age group. In 2020, there were about 40 births per 1,000 girls of these ages worldwide, down from almost 80 per 1,000 in the early 1970s. Despite the rising population of young people, the total number of births to women aged 15–19 has also decreased since then, falling from around 14 million annually in 1970 to 12 million in 2020, i.e. slightly below 1 in 10 births. Fertility in this age group varies considerably from one region to another. It is highest in sub-Saharan Africa, where each year around 10% of young women aged 15–19 have a child. It is around 10 times lower in Europe, where the rate is 1 birth per 100 women (and less than 1 birth per 200 women in France).

1.1. Under-15 fertility: an understudied phenomenon

But what about births among younger girls? For a long time, demographers paid little attention to births under age 15 as they account for a minute share of total births and have little impact on population growth. But should these births be overlooked? Pregnancies at these very young ages have a negative impact on the health and mortality of both the girls and their children, and on the education of these school-age mothers [1, 2, 3]. Yet information on the frequency of births in this age group remains very incomplete. While some data exist, the question was overlooked for many years, and estimates for the Global South were established only recently (Box 1). Several data sources are used here to provide an overview of under-15 fertility in the world and to examine trends since the 1970s. For a subset of countries with available data, we will also look at whether these very early births occur within a union (marriage or non-marital cohabitation) or to single mothers.

In Western countries and some countries of Latin America and Asia, information on early adolescent fertility is drawn mainly from civil registration and vital statistics systems. These data are available in the Human Fertility Database (www.humanfertility.org) and in the United Nations demographic yearbooks.

In many other countries, birth registration is not exhaustive, and estimates of under-15 fertility are based on demographic surveys. While these surveys generally only cover women aged 15–49, all births are recorded in their birth histories, including those before age 15, making it possible to measure fertility rates at ages 10–14 and their evolution over time [6]. By combining several surveys, it is often possible to go back as far as the 1970s. In our study, we merged all available surveys for each country, calculated under-15 fertility rates, and then smoothed the trends obtained. The estimates presented here are based on these smoothed trends.

We used under-15 fertility estimates in the most recent period for 164 countries in all. They are drawn from the Human Fertility Database (32 countries), United Nations demographic yearbooks (37 countries), and national demographic surveys (93 countries). For two countries (China and Saudi Arabia), the fertility rate at ages 10–14 was estimated indirectly based on fertility at ages 15–19 published by the United Nations Population Division [7]. For 133 countries, we also compared the data on two dates. The rates correspond, on average, to the year 2016 for the most recent estimates and to 1971 for those in the early 1970s. In 70 countries of the Global South, we also estimated the share of births and conceptions occurring within unions using data from the most recent surveys.

1.2. Large variations in under-15 fertility across the world

Estimates of annual numbers of births before age 15 in the world vary between a low of around 200,000 [4] and a high of more than 770,000, a figure obtained for developing countries only, excluding Western nations [5]. Our own estimation, based on more recent and comprehensive data than previous studies, is between these two extremes. We find approximately 400,000 such births worldwide in 2016, of which more than half in sub-Saharan Africa. This corresponds to around 13 annual births per 10,000 girls aged 10–14.

Nigeria, which combines a high fertility rate at ages 10–14 (more than 50 births per 10,000 girls) and a large population of girls in this age group (almost 12 million), is the country with the largest absolute number of births before age 15 (Table 1). Around 2017, slightly fewer than 60,000 children were born to mothers under age 15 over a 12-month period, representing slightly less than 1% of all births in the country. While India has a much larger population, annual births to girls under 15 number around 23,000, and the figure in Bangladesh is similar. It is slightly below 20,000 in the Democratic Republic of Congo, Brazil, and Angola, followed by other countries such as Madagascar, Mozambique, Niger, and Sudan. In Western countries, under-15 fertility is much lower, with around 1,800 births per year in the United States, 100 or so in France and the United Kingdom, around 60 in Canada, 20 in Belgium, and 2 in Switzerland.

1.4. In the Global South, a majority of under-15 births to girls in a union

Survey data from 70 developing countries can be used to estimate the share of births within a marriage or cohabiting union. Overall, around three-quarters of births before age 15 occur within a union (Figure 2), and for around a quarter of these births, the pregnancy predated the start of the union (conception before entry into union), illustrating the close link between union and childbearing, including among the youngest women. Early unions and marriages—sometimes at ages well below the legal marriage age and without the girls’ consent—lead to early pregnancies, and pregnancies themselves can be a factor in initiating or bringing forward a union. Situations vary from one region to another, however. In sub-Saharan Africa and Latin America, births outside a union are more frequent among under-15s (30%–40% of the total) than in Asia and North Africa (around 15%). The proportion is also higher among girls aged 10–14 than among those aged 15–19, pointing up a difference in the circumstances of these births for the youngest girls. For example, births are less frequently wanted by the youngest girls, and the age difference with the father is higher (almost 10 years on average) than for those aged 15–19.

In practically all countries, under-15 fertility has decreased substantially since the 1970s (Figure 3), sometimes to a remarkable extent, as in some Asian countries, such as Bangladesh or India, where rates have fallen tenfold and thirtyfold, respectively. Elsewhere, however, in Latin America and sub-Saharan Africa especially, the decline is less pronounced. Rates have fallen by 30% in Ecuador and 40% in Colombia, for example, and by 2016, the rates in these countries were comparable to that of Bangladesh (around 30 per 10,000). In sub-Saharan Africa, despite major improvements in certain countries, under-15 fertility remains generally high.

The decline has continued in Western countries likewise, although in the 1970s rates were already lower than in other parts of the world. For example, it decreased sevenfold over 50 years in the United States, fourfold in the United Kingdom, and around threefold in France, where it stood at 4 births per 100,000 girls aged under 15 in 2019, down from 11 per 100,000 in 1971.

Overall, the decrease—in relative terms—has been much larger at ages below 15 than at ages 15–19, with a sixfold decrease among the former since the 1970s and a halving among the latter. The increase in age at marriage has doubtless played a key role, in North Africa and Asia especially, as has educational expansion and greater access to contraception for young women, although the situation in this respect is still far from ideal. In some contexts, an increase in induced abortions may also have reduced under-15 fertility, but abortion data for this age group are even scarcer than for other ages.

While early adolescent fertility has fallen sharply over the last 50 years, there are still several hundred thousand births to girls under 15 each year in the world, primarily in poor countries. The number of pregnancies in this age group is probably much higher, although no reliable estimates are available. Health risks for pregnant girls and their children, exposure to rejection by their families, forced marriages, and the threat of gender-based violence are among the issues associated with very early childbearing. Despite the progress achieved, there is still a long way to go before all young girls can enjoy an early adolescence free of pregnancy or motherhood.

Approximately 400,000 births to adolescent girls under age 15 occurred worldwide each year in the 2010s, representing a fertility rate of around 13 annual births per 10,000 girls aged 10–14. More than half of these occurred in sub-Saharan Africa, where we observe 40 annual births per 10,000 girls aged 10–14. Since the early 1970s, fertility among girls aged 10–14 has decreased sixfold worldwide. In countries of the Global South, a majority of these births occur within a union (marriage or non-marital cohabitation).

Bruno Schoumaker, David A. Sánchez-Páez, Under-15 fertility around the world, 2022, Population and Societies, no. 601

Across the world, is men’s fertility different from that of women?