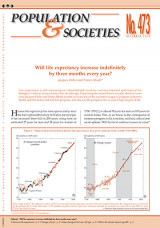 Subscribe to the e-alert
Download
Life expectancy is still increasing in industrialized countries and has extended well beyond the biological limits announced just a few decades ago. Examining the record levels actually observed overtime, Jacques Vallin and France Meslé present an overview of the successive stages of progress in human health and the factors behind this progress, and discuss the prospects for an ever longer length of life.
In an article published in Science in 2002, James Oeppen and James Vaupel, observing a constant linear progression (at arate of 3 months per year) in maximum life expectancies since 1841, concluded that the trend was set to continue for manyyears to come. A critical re-assessment of the data and a more
long-term historical perspective suggest, on the contrary, that the rates of increase in life expectancy have varied overtime, as the factors driving improvements in human health have themselves evolved. In particular, the pace of progressduring the most recent phase - that of the cardiovascular
revolution - was slower than during the previous period, that of the fight against infectious diseases. As life expectancyincreases, future progress will become heavily dependent on a massive decrease in mortality at more advanced ages.What happens in years to come will depend on future innovations,
the form and timing of which are unknown today.
A life expectancy of 100 years is certainly not unachievable, but no-one knows if and when it will occur.