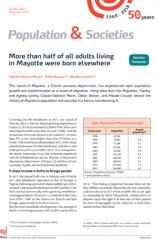 The island of Mayotte, a French overseas department, has experienced rapid population growth and transformation as a result of migration. Using data from the Migration, Family, and Ageing survey, Claude-Valentin Marie, Didier Breton, and Maude Crouzet retrace the history of  Mayotte’s population and describe the factors transforming it.

With around 23,400 inhabitants in 1958, the population of the island of Mayotte has increased by more than tenfold in the last 50 years, reaching 256,000 inhabitants in 2017. Three-quarters of children have foreign-born mothers, mostly from the Comoros. Immigration, which has long contributed to population growth, is coupled with considerable emigration, notably among young people. More than half those aged 20–24 who were born in Mayotte reside in metropolitan France, for example. What has emerged is a transformation of the population structure: more than half of adult inhabitants of the island were not born there and are from the neighbouring Comoran islands. Mayotte’s population is very young, with educational deficits. One of the island’s first challenges is thus to improve education.

Labour Market Integration of Young People from the French Overseas Départements: At Home or in Metropolitan France?