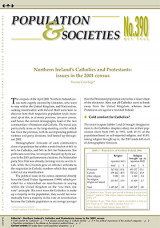 Northern Ireland’s Catholics and Protestants : issues in the 2001 census.

Northern Ireland’s Catholics and Protestants: issues in the 2001 census

The outputs of the April 2001 Northern Ireland census were eagerly awaited by Unionists, who want to stay within the United Kingdom, and Nationalists, seeking reunification with Ireland. Both were keen to discover how their respective population totals measured up at this, as at every previous, ten-year census, and hence the current demographic load of the two communities—Protestant and Catholic. The mood was particularly tense as the long-standing conflict which has riven the province, with its accompanying political violence and party divisions, had heated up throughout 2002.

The future population of Israel and Palestine.

Children’s experience of the first lockdown in France