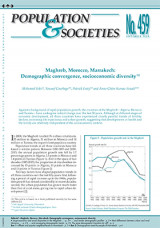 Subscribe to the e-alert
Download
Against a background of rapid population growth, the countries of the Maghreb - Algeria, Morocco and Tunisia - have undergone radical change over the last 30 years. Although at different stages of economic development, all three countries have experienced closely parallel trends of fertility decline, increasing life expectancy and urban growth, suggesting that developments in health and the family are relatively independent of the socioeconomic context.

In 2008, the Maghreb totalled 76 million inhabitants, with 35 million in Algeria, 31 million in Morocco and 10 million in Tunisia. Although incomes and living conditions vary, population growth has followed a parallel downward trend in all three countries since the 1980s. Differences in mortality rates have been narrowing, while fertility has fallen to low levels throughout the Maghreb. These contrasts are also observed within Morocco, where rural-urban disparities, accentuated by rural exodus, remain large. While income and educational levels still vary by a factor of two, demographic behaviours are converging, despite persisting inequalities in access to healthcare. A detailed district-by-district study confirms these analyses for the population of Marrakech itself.

The "Civil Solidarity Pact" (PACS) in France an impossible evaluation.

The future population of Israel and Palestine.

Northern Ireland’s Catholics and Protestants : issues in the 2001 census.