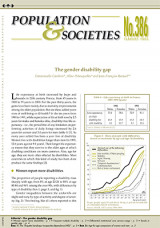 Life expectancy at birth increased by leaps and bounds in 20th century France, from 45 years in 1900 to 79 years in 2000. For the past thirty years, the gains have been mainly due to mortality improvements among the older population. But are these added years ones of well-being or ill-health? In the ten years from 1981 to 1991, while expectation of life at birth rose by 2.5 years for males and females alike, disability-free life expectancy— i.e., the period free of any limitation on performing activities of daily living—increased by 2.6 years for women and 3.0 years for men (table 1) [1]. So every year added has been a year free of disability. Women live with disabilities longer than men (in 1991, 12.6 years against 9.1 years). Their longer life expectancy means that they survive to the older ages at which disabling conditions are more common. Also, age for age, they are more often affected by disabilities. Most countries in which this kind of study has been done produce the same findings

We only die once… but from how many causes?

A double disadvantage for manual workers: more years of disability and a shorter life expectancy

Contribution of Lifelong Adverse Experiences to Social Health Inequalities: Findings from a Population Survey in France

Self-rated Health of French Prison Inmates: Measurement and Comparison with other Health Indicators