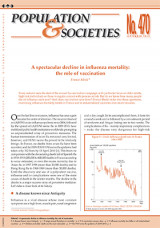 A spectacular decline in influenza mortality: the role of vaccination

Subscribe to the e-alert
Download
Every autumn sees the start of the annual flu vaccination campaign, with particular focus on older adults, high-risk individuals or those in regular contact with persons at risk. But do we know how many people die of influenza each year? And does vaccination save lives? France Meslé looks into these questions, examining influenza mortality trends in France and in industrialized countries over recent decades.
Up until the 1970s, flu epidemics commonly caused 10,000 to 20,000 direct deaths each year in France, not counting those who died from complications of the disease. The development of an effective vaccine, regularly reformulated in response to new viral mutations, has brought a ten-fold reduction in deaths in France and in other industrialized countries over the last 40 years. This success has been strengthened by making flue vaccination available free of charge to older adults, who are particularly prone to lethal complications. The twentieth century was marked by three major pandemics resulting from the emergence of new viral strains: Spanish flu in 1918-1919, Asian flu in 1957-1958 and Hong Kong flu in 1968-1969, which affected children and young adults most severely. Likewise, two-thirds of all persons killed by the H1N1 swine flu virus of 2009-2010 were aged below 65. Fortunately, the epidemic proved to be much less deadly than initially feared, with just 312 deaths in France.

Recent Improvements in Life Expectancy in France: Men are Starting to Catch Up

Living beyond the age of 100