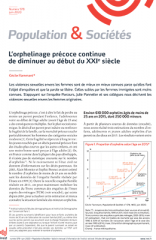 How many orphan children are there in France? Has the proportion of orphans decreased over the last few decades with the decline in adult mortality? Analysing different sources of
information, Cécile Flammant addresses these questions and the issue of whether orphans live in more disadvantaged households than other children.

In metropolitan France in 2015, around 610,000 children and young people under age 25, including 250,000 under age 18, had lost one or both parents. The proportion of orphans has decreased since 1999 thanks to progress in reducing adult mortality. However, the decline would have been much greater without the trend toward later childbearing, which
has raised parents’ mean age and hence their risk of dying while their children are still young.
More than 9 in 10 orphaned minors live with their surviving parent, generally in a lone-parent family. Families with orphans are more likely to have a lower standard of living
than those with no orphans because the surviving parents of orphaned children are much more often lone-parents with a lower socio-economic status, on average, than other
families. However, when family structure and socio-economic status are considered, the disadvantage of families with orphans disappears.