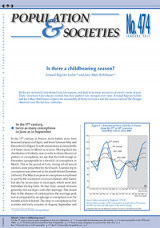 Is there a childbearing season?

Subscribe to the e-alert
Download
Births are not evenly distributed over the seasons, and tend to be more numerous at certain times of year. These variations have always existed, but their pattern has changed over time. Arnaud Régnier-Loilier and Jean-Marc Rohrbasser explain the seasonality of births in France and the reasons behind the changes observed over the last four centuries.
In the 17th century in France, there were more births between January and April, and fewer between May and December. Twice as many children were born in March as in June. This pattern of births was long thought to be a product of nature, with the increase in conceptions from April being linked to spring and the increase in temperature. In reality, it was linked to the seasonality of marriages and to the religious calendar, since sexual relations and weddings were forbidden during Lent and Advent. The seasonality of births became less marked in the 19th and 20th centuries, and the birth peak moved from winter to spring. These changes reflect a shift in behaviours, notably the less strict observance of religious precepts. Today, there is just one birth peak at the end of September, linked to conceptions during the New Year festive period which are twice as frequent as on a normal day of the year, resulting in a surplus of births and of induced abortions.

A Longitudinal Approach to Family Trajectories in France

The unemployment delays the arrival of the first child in France

Analysis of determinants and prevalence of LAT

How often do adult children see their parents ?

Does the birth of a child change the division of household tasks between partners?

When fathers lose touch with their children after a separation