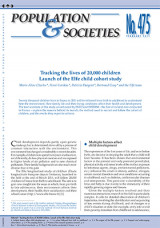 Twenty thousand children born in France in 2011 will be followed from birth to adulthood to understand how the environment, their family life and their living conditions affect their health and development. The lead scientists of this study co-ordinated by INED and INSERM - the first of its kind ever conducted in France - explain the reasons behind its launch, the method used to recruit and follow the cohort of children, and the results they expect to achieve.

New research is needed to understand how the ongoing changes in children’s early environment affect their development, their health and their socialization. The multiple factors involved and their numerous interactions make this type of research particularly complex. The best way to track detailed trajectories through childhood is a cohort study. This involves selecting a large sample of children whose lives are followed throughout their development, if possible until they reach adulthood. Such cohorts have existed in other countries for many years, but not, until now, in France. The Elfe longitudinal study of children (Étude longitudinale française depuis l’enfance), launched in the field in 2011, aims to fill this gap. It will follow a cohort of 20,000 children from birth to adulthood via a multidisciplinary approach. Elfe was born out of the questions raised by researchers and the concerns expressed by various public bodies. The national health and environment plan (Plan national Santé-environnement) of 2004 provided the decisive impetus for the project to go ahead.