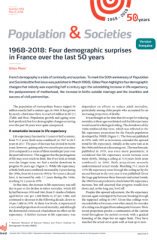 French demography is a tale of continuity and surprises. To mark the 50th anniversary of Population and Societies (the first issue was published in March 1968), Gilles Pison highlights four demographic changes that nobody was expecting half a century ago: the astonishing increase in life expectancy, the postponement of motherhood, the increase in births outside marriage and the invention and success of civil partnerships.

Life expectancy in France rose by 11 years between 1967 and 2017, from 71.5 to 82.5 years for both sexes combined. The forecasts produced several decades ago failed to anticipate this spectacular progress, and life expectancy has still not hit the "ceiling" that was predicted.
The past half-century has also been marked by three other demographic surprises: the postponement of motherhood, with a four-year increase in the age at childbearing since 1977, the rise in non-marital births, which now outnumber births within marriage, and the invention and success of the PACS civil partnership; the number of PACS registrations now almost equals the number of weddings.