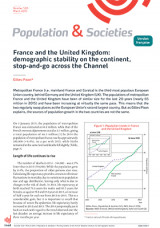 Metropolitan France (i.e. mainland France and Corsica) is the third most populous European Union country, behind Germany and the United Kingdom (UK). The populations of metropolitan France and the United Kingdom have been of similar size for the last 20 years (nearly 65 million in 2015) and have been increasing at virtually the same pace. This means that the two regularly swap places as the European Union’s second largest country. But as Gilles Pison explains, the sources of population growth in the two countries are not the same.

In the mid-eighteenth century, the population of France was four times larger than that of the United Kingdom (around 25 million versus 6 million). In the late eighteenth and nineteenth century, population growth was much weaker in France than in the UK, and by 1918 the two populations were the same size (nearly 40 million inhabitants). The UK population then continued to grow, so that by 1944 it was larger than France’s by 10 million (49 million versus 39 million). After World War II, France’s population gradually recovered, and since the mid-1990s, the two populations have remained fairly similar in size and increased at the same pace. However, recent population growth has been more regular in France and is due primarily to natural increase (births minus deaths), whereas in the UK net migration (the difference between migrant entries and departures) is the main growth factor.