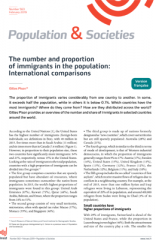 The proportion of immigrants varies considerably from one country to another. In some, it exceeds half the population, while in others it is below 0.1%. Which countries have the most immigrants? Where do they come from? How are they distributed across the world? Gilles Pison provides an overview of the number and share of immigrants in selected countries around the world.

The United States has the highest number of immigrants (foreignborn individuals), with 48 million in 2015, five times more than in Saudi Arabia (11 million) and six times more than in Canada (7.6 million). However, in proportion to their population size, these

two countries have significantly more immigrants: 34% and 21%, respectively, versus 15% in the United States.