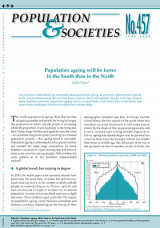 Subscribe to the e-alert
Download
The countries of the North are concerned about population ageing, as if it were a phenomenon specific to the industrialized world. But as Gilles Pison explains, the trend is global. Though only beginning in many Southern countries, population ageing will occur much faster in the South than in the North, and raises many challenges that must be addressed without delay.
The world population is ageing. Now that families are get-ting smaller and people are living for longer, the proportion of adults and old people is increasing while the proportion of young people is declining. Unless large families once again become the norm - an unrealistic long-term option, resulting in unlimited population growth - this ageing trend is inevitable. Population ageing is affecting the entire planet, but has not reached the same stage everywhere. In many Southern countries it is just starting, but will become more acute over the coming decades. It will also take place more quickly than in the North. In China, for example, the proportion of over-65s is forecast to double from 7% to 14% within 25 years, and in Vietnam within just 17 years, while in France this doubling was spread over a period of more than a century.

Children’s experience of the first lockdown in France