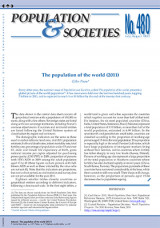 Subscribe to the e-alert
Download
Every other year, the summer issue of Population and Societies, called The population of the world, presents a global picture of the world population. It has risen seven-fold over the last two hundred years, topping 7 billion in 2011, and is expected to reach 9 or 10 billion by the end of the twenty-first century.
The world population is still growing. After topping 6 billion in 1999, it will reach 7 billion this year (2011) - an increase of 1 billion in the space of 12 years - and should total 8 billion by 2025, just 14 years from now. Population growth is slowing down, however: annual growth has fallen by almost half (1.1% in 2011) since it peaked at 2% fifty years ago, and should continue to decrease until the world population levels off at around 9 or 10 billion one century from now.

This slowdown is the consequence of declining fertility. Across the world today, women have 2.5 children on average, compared with 5 in 1950. But this global average conceals large disparities across regions and countries. Fertility is lowest in Taiwan (0.9 children per woman) and highest in Niger (7 children). The world’s regions where fertility is still above 4 children include practically all of sub-Saharan Africa, some countries of the Arabian Peninsula and the regions extending from Afghanistan to Pakistan and northern India. These are the countries where population growth will be concentrated in years to come.

One of the major changes in future decades will be the exceptional population growth in Africa. Including North Africa, the population of the continent could quadruple over the next century, rising from 800 million inhabitants in 2000 to 3.6 billion in 2100, despite the high prevalence of AIDS. While one person in seven currently lives in Africa, the proportion will probably be one in three a hundred years from now. Growth should be especially rapid in sub-Saharan Africa, where the population is set to rise from just over 600 million in 2000 to almost 3.4 billion in 2100.

With 1.3 billion inhabitants, China is the world’s most populous country, although India, which is not far behind (1.3 billion), should take the lead within the next ten years (probably in 2020) since its population is growing faster due to higher fertility (2.6 children per woman on average, versus 1.5 in China).

Being a single man in rural China